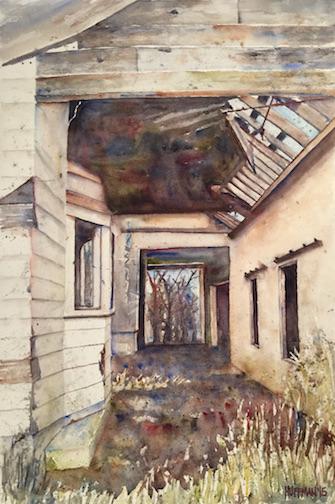 My grain elevator project was featured on a new PBS show called Journey Indiana!  This was a really neat experience.  Jason Pear with Journey Indiana is amazing.  After about four hours working through my project with me, and three different locations, he condensed it all into a five minute clip.  I feel like he really captured the heart of this project.  Check it out by typing Journey Indiana-An Artist's Eye into youtube.com or go to journeyindiana.org and it's Episode 108.  Very nerve wracking, but worth it in the end.  Love my grain elevators.

Check out www.journeyindiana.org or Journey Indiana on Facebook.  This show will soon feature my grain elevator project, which continues to delight and amaze me. 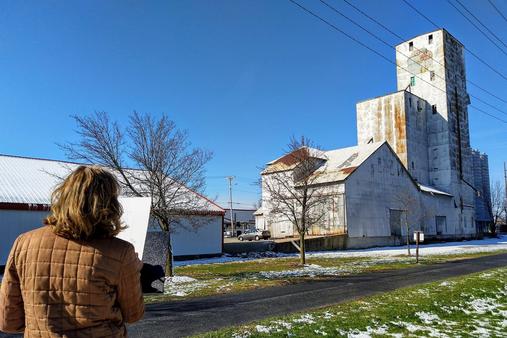 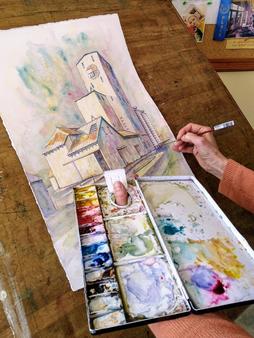 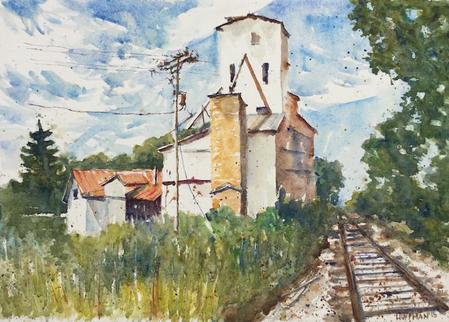 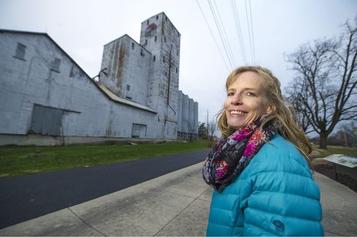 "Grain elevators...define our horizon and our sense of place" - Linda Laird
We spent the morning with an Indiana woman who's documenting our state's historic grain elevators...one painting at a time.  Stay tuned for Cathleen Huffman's story on an upcoming episode of Journey Indiana.  Can't wait? Head over to Cathleen Huffman Watercolors to see more of her beautiful work.
​

Article from The Daily Reporter in December, 2016 (also printed in the Columbus Republic):

“That one is gone. That one is still standing. This one, I’m not sure,” she reported.  She paused in front of a painting of the Fairland grain elevator and related a recent telephone call from a friend living in that area.

“He said it’s a good thing I documented this because it’s being torn down as we speak,” she said.

Artist Cathleen Huffman has made it her mission to chronicle a disappearing relic of Indiana’s agricultural heritage: the local grain elevator. Grain elevators, found near the railroad tracks, have long been a feature of the small town Indiana skyline but are falling into disuse with the progression of time and technology.

A reception will be conducted in her honor from 6 to 9 p.m. Dec. 9 at the Twenty North Gallery, 20 N. State St. Huffman will be on hand to talk about the project and the individual grain elevators pictured in her artwork.

The 28 watercolors hanging in the gallery represent only half of Huffman’s body of work. She painted her first grain elevator — the Greenfield grain elevator located on West Osage Street — in 2004.

As president of Greenfield Historic Landmarks, historic preservation was already a cause dear to her heart; photographing and painting these disappearing structures quickly became a calling.

“There is a character to historic architecture that needs to be documented and preserved,” Huffman said. “Grain elevators are representative of the importance of agriculture in our state.”

In June of 2015, an opportunity arose for Huffman to bring more public awareness to her cause. After 11 years of photographing and painting grain elevators, Huffman applied for Bicentennial Legacy Project status for her work.

Bicentennial Legacy Projects are those that have received official designation by the state of Indiana as projects which promote and highlight the best of Indiana’s heritage. With Indiana’s 200th birthday of statehood being celebrated on Dec. 11, more than 1,368 programs, events and activities have received Legacy Project status.

Huffman submitted her application and then received a phone message from Perry Hammock, executive director of the Indiana Bicentennial Commission. She was worried that her project idea had been rejected, but nothing could have been further from the truth.  Hammock was calling to help her through some of the fine points of filling out the Legacy Project paperwork — to praise her work.

“He was so nice and encouraging, optimistic and motivational,” Huffman recalls. “I wanted to go out and start painting grain elevators right then.”

Word of Huffman’s project got around. The article in the Greenfield Daily Reporter (“Elevated Art,” July 9, 2015, p. A4) was reprinted in the “Indiana Economic Digest” the following month, which caught the eye of Bruce Selyem, chairman of the Country Grain Historical Society. He, too, commended her on her work.

Huffman understands that grain elevators have outlived their usefulness and is now an advocate for repurposing the old buildings before they are beyond rescue. She cites the Elevator Brewing Company, located in the abandoned grain elevator in Marysville, Ohio.

“The need for their original use is past,” she said, “but for many, adaptive reuse is possible.”

The exhibit will be on display at Twenty North Gallery until the end of December. The next stop for the collection of grain elevator paintings is the Rapp Gallery at the Indiana Landmarks Center at 1201 Central Ave. in Indianapolis.

Huffman plans to continue her work of documenting Indiana grain elevators. She recognizes that there are still parts of the state she hasn’t been to see if the elevators are still standing or if they have been demolished. She is discouraged when she arrives at a location only to find remnants — a foundation, a structure so badly neglected that it is beyond restoration, or, as in one case, an elevator found mostly in pieces in four dumpsters.

“There is definitely a sense of immediacy,” Huffman said. “I have to hurry.”

My painting of Fairland's grain elevator was juried into the annual Watercolor Society of Indiana's exhibit at the Indianapolis Museum of Art!  Show runs Oct. 9 - Dec. 4, 2016.  Here's the painting:

I am excited that the painting below has been juried into this year's Hoosier Women in Art exhibit!  I found what's left of the fascinating old Carlos grain elevator on my Spring Break travels.  The show runs from March 5 - 26 at Garfield Park Art Center in Indianapolis.

The article below was in Greenfield's Daily Reporter as well as the Indiana Economic Digest.  Thank you, Christine Schaefer!

GREENFIELD — Watercolorist Cathleen Huffman has been painting grain elevators since 2004.

This month, the Indiana Bicentennial Commission endorsed her proposal for “Indiana’s Historic Grain Elevators” as a Bicentennial Legacy Project, and she is thrilled.

“It’s not a grant or any kind of award,” Huffman said. “But it’s an incentive to finish my project of documenting Indiana’s grain elevators through painting and photography.”

Many of Indiana’s grain elevators, which were once a staple in small-town America, are gone. Those not already demolished have often fallen into disrepair.

“Most towns had grain elevators,” Huffman said. “They were a part of Indiana’s agricultural history and the Midwestern landscape.”

Huffman has more than a year to complete the project. She has already photographed 92 separate grain elevators. She has more than 20 paintings in the works with about a dozen completed. A gallery showing has been scheduled at the Creative Arts and Event Center in December 2016 to help Hancock County celebrate Indiana’s bicentennial.

“The hunt is really, really fun,” Huffman said. “When you drive into one of these small towns and find it’s still standing, it’s really rewarding, and some are even still operating.”

That’s not always the case, however. Huffman recounted the story of the Rosston grain elevator in Boone County. She drove into town and found it — in four separate dumpsters.  The story has a somewhat happy ending, though. Huffman received a call from a friend asking if she would be interested in an old sepia-toned photo of the friend’s great-grandfather standing in front of an elevator — the Rosston grain elevator. Her upcoming exhibit will include a painting of the now-demolished elevator.

“At least I have a photo of what it used to look like,” Huffman said.

Although she said she is still hoping for a financial sponsor, Huffman’s project has some strong backing. Greenfield Historic Landmarks is her sponsor, with other local organizations such as Greenfield Main Street and Greenfield Parks and Recreation Department all being very supportive of her work. She also has the endorsement of Indiana Landmarks.

Bob Hunt, owner of the Creative Arts and Event Center, has worked with Huffman on the Greenfield Historic Landmarks board.

“What she’s doing is great,” Hunt said. “In 30 years, all the grain elevators will be gone except in photos and painting.”

Huffman’s interest in painting started 15 years ago when she quit her job as a technical illustrator to stay home with her children. She said she has always loved historical architecture, and she recalled painting her first grain elevator.

“I was amazed at how these two things that I loved could come together: watercolor painting and historic architecture,” Huffman said.

Huffman, a signature member of the Watercolor Society of Indiana, has done paintings of the Hancock County Courthouse, the Riley Home, a former Friends church building on State Road 9, Hancock County’s iron bridge, many small-town streetscapes, and some commissioned work of historic homes.

She recently returned from the Boston area, where she had the privilege to study under Charles Reid, an internationally known watercolorist.

Huffman shared a map documenting the known locations of where grain elevators are still standing or where they used to stand, with a map key of how many can be found in each county in Indiana and how many she has visited thus far. She also has a thick binder of photographs of grain elevators, but she welcomes the public’s help.

If anyone out there has any photographs of Indiana’s grain elevators or any information on them, she said she hopes they’ll share them.

She can be contacted through www.cathleenhuffman.com.

Huffman said the project is one that will never really be finished. She is documenting Indiana’s story.

“In the case of the grain elevators, they won’t be around much longer,” Huffman said. “The documentation will be all that’s left.”